Once again it’s been way too long since I’ve updated this page. So what’s happened with Danielle and I in the past year and a half?

Well, for starters, some not so good things. We endured the passing of both her grandfather on her dads side and her grandmother on her moms side. We know they are both in better places, but we sure do miss them.

That’s the main points of bad in life over the past year and a half. It’s been mostly good for us. We celebrated Levi’s second birthday recently. Farm themed and lots of fun. Little man is growing up so fast. His vocabulary is shooting through the roof, which is awesome. He’s having so much fun now playing at Mothers Morning Out.

He’s also obsessed with busses (or anything he thinks might be a bus), farm animals (still), and now The Very Busy Spider from Eric Carle. Oh, and dinosaurs. 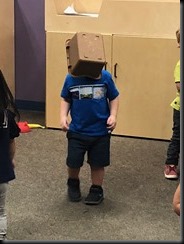 And I’m still not sure what this is all about. but he sure makes us smile on a daily basis.

As for Danielle and I, we recently celebrated her birthday and our anniversary with an overnight trip (minus Levi) to Louisville. Thanks to our neighbors for keeping little man overnight for us. We got to enjoy an anniversary dinner to Melting Pot. That’s where we went on our honeymoon, so it was nice to revisit one after 7 years. A beautiful night’s rest (meaning not having to get up to an alarm or a 2 year old) in a lovely hotel followed by a fantastic breakfast at First Watch, and it was a good weekend to just reconnect and pay attention to each other.

Other than that, it’s all just normal life. School/work, and watching the boy grow up.

Just a quick wish to all our family and friends to have a great and Happy Thanksgiving. We hope that you enjoy your day with family, friends, and loved ones.  To those who are working today, we hope you are safe and have a good day as well.

As most anyone reading this blog post is aware, Danielle and I have been in the process of becoming parents.

We decided to adopt for personal reasons.  This is something we thought about, prayed about, and finally felt God has prepared us for this moment.

If you haven’t heard, we are looking to adopt a newborn infant.  As this is our first adoption, we will be staying domestic.  We have nothing against international adoptions, but we just didn’t have the time and fiscal resources to commit at this point in our lives.

The process up till now has been interesting, full of excitement and anticipation.  That will only grow exponentially now, I am sure.

Today, our adoption profile booklets were placed in the mail to the agency.  They’ll have them by noon tomorrow.  Which means, as long as they say the booklets are okay and we don’t need to make any changes, they can start showing them to birthmothers.

I’d love to share some pictures of a few of the baby items we have prepared for Baby Rub (yeah, still don’t know if we’ll get a boy or girl, so no chance of first names being dropped any time soon).  Right now I don’t have access to them. Be sure though, that we’ll keep you updated on what’s happening.

For now, if you are so inclined, please keep us in your prayers.  Most specifically for patience as we enter the “official” waiting period.  Please pray for our potential birthmother, as we know the decision she’s making to place her child for adoption is one made from love, but it also probably one of the hardest she’ll ever make.  And please pray that God speaks to her heart in helping the right mother choose us.

June 6th, 2014: Well, it’s officially moving day.  I say officially because there’s a nice crew of movers packing up our boxes and furniture and getting ready to haul it over to our new home.

I have to admit, as I stand here and watch (don’t judge me, I’d rather stay out of their way and let them work), it really just now hit me that I’m leaving this small house that has been my homestead for the past 12 years.  I still remember moving in day.

And while it’s a bit bittersweet to be preparing to say goodbye to this little house, it’s so fantastic that Danielle and I are finally getting to move into OUR house.  Danielle moved into my house after we got married, and now the new place is OUR house.  So saying good by to the Longworth home isn’t all that bad.

The future’s so bright, I gotta wear shades. 🙂

Okay, so who didn’t figure that it was time for the obligatory Christmas themed blog post.

After a great Thanksgiving weekend visit with family in Cincy, Danielle and I are back home and got a chance to put out our Christmas decorations.  A few new additions this year include;

our new advent wreath (it blends well with the garland).  and yes, our stocking are hung with care, just no chimney.  The furnace is nearby, though, if that counts;

and we added the three wise men to our Willow Tree Angel Nativity set;

I almost forgot our new tree this year (okay, perhaps not the best picture of it, but trust me, it’s pretty.)

We hope everyone has a fantastic, merry, and blessed Christmas season this year.  Enjoy your time with family and friends, eat hearty (and healthy!), and have fun exchanging gifts at the end of the month.  We hope everyone remembers the reason we are celebrating; the greatest gift of all, the birth of Jesus.

No, I don’t mean houses or anything like that.  Our blog has moved.

You can follow us now at dndrub.net.  And watch for foodies.dndrub.net to come active in the near future.

Watch for our new blog, coming soon.  That one we both will keep up.  It’s going to be focused on healthy eating, new recipes, and the fun we have making them, eating them, and sharing them with friends.

Danielle and I opted to spend this weekend having an early Christmas celebration.  I took an extra vacation day this past Friday, and we enjoyed a nice long morning of working out, followed by a showing of the new movie “The Hobbit”.

Saturday, we volunteered at a local school that our church has partnered with.  Dani helped in the daycare while I helped with guest directions for the Affordable Christmas program, which helps parents buy gifts for their kids at affordable prices.  We had 94 family units come through in the 2 hour time span, and let me tell you, what an awesome feeling it was knowing these families would be able to have a good Christmas.

Of course, all of that morning was tempered by the events of Friday in Connecticut.  Out hearts and prayers go out to those families.  We won’t even try to imagine what they feel, because we have nothing to begin even conceptualizing their grief.  But we pray the peace of God is on them.  Our Saturday evening was ended with the Christmas at Crossroads music concert.  Good music, good message, and a chance to see a few faces I hadn’t seen in awhile.

Sunday we had a very lazy day.  And I do mean very lazy.  Started with a holiday tradition of homemade egg/sausage/cheese casserole, gift exchanges (my wife fed my Star Wars addiction!!!), and then lazying on the couch for most of the morning.

A good 2.25 mile walk in the afternoon, and a glazed ham with veggies for dinner ended the day.

All in all, it’s been a great Christmas so far.  We wish everyone a wonderful and blessed Christmas season, and a Happy New Year.

Okay, so this is a few days late in coming, but I wanted to share a great time Danielle and I had this past weekend.

December first was an odd day from a meteorological standpoint, as the weather was in the 70s, sunshine, and very, very comfortable.  Given that this is southern Indiana, we expect colder weather.  But hey, we didn’t complain.

Danielle and I wanted to do some walking so we started our day in Newburgh visiting one of our favorite small businesses, Mulberry Jeans.  A cup of freshly brewed hot tea for each of us (and some loose leaf to take home!) was a good way to start the trip.

While we were there, two individuals in Victorian-period costumes came in.  He was an older gentleman in properly gentleman fashion, and she was an older lady in proper civilized dress.  “Classy” is how one lady later described it.

We were also introduced to the scavenger hunt going on downtown.  Several of the downtown shops were participating in an Elf on the Shelf hunt.  Some stores had a point value of 1, others were worth 2 points.  Contestants were challenged to locate the elf in certain stores, then have a store employee sign off a check list for them.  After getting 15 points, you could turn your sheet in for a chance to win a $200 downtown shopping spree.

Yeah, we joined the hunt.  I’m not sure if I had more fun hunting for the elf or visiting several small businesses that I would not have ever considered stepping foot into while in Newburgh.  We even found and purchased, thanks to this little adventure, a new door ornament for Christmas; a hand made Christmas star, made from tobacco sticks and a heavy gauge wire.  Goes perfect on the front door.

We ended our wonderful day by going to see the Icemen hockey game.  Danielle scored some tickets for free, and since it was Star Wars night, we had a blast seeing all the costumed actors.  Some really nice outfits and costumes were there.  And the Icemen won their game.

So tomorrow is the Bob’s Gym See Bob Run 5K run/walk.  Danielle and I will be doing this together.  It’s our 2nd 5K together, and should be fun.  I suspect it’ll be a bit cold, but it’ll still be fun.

Expect some pictures, as we are going in costume as well.